There are actually three different types of honey bees that work together in a hive: Worker, Drone, and Queen.

The workers are the smallest bee in the hierarchy but far outnumber the other two. The worker bees secrete the wax used in a hive and form it into honeycombs. They also are the bees that bring nectar and pollen to the colony, and transform the nectar into honey.

The drone bees are visibly larger than their counterpart, the workers. They are the male honey bees in a colony and their only function is to fertilize the queen bee. Their typical day consists of eating, resting, and loitering in mating sites.

The queen bee is recognized by her abdomen. It is much smoother and longer than the workers or drones. The abdomen actually extends past the folded wings unlike the other two. The queen is responsible for hive production, egg-laying from the spring until the fall as long as pollen is available.

Bumblebees are fat, fuzzy bugs with short, stubby wings. That sounded rude, but sometimes the truth hurts. They are larger than honeybees, but don’t generate nearly as much honey. However in the realm of pollinating, they are critical to the ecosystem.

There are actually over 200 species of bumblebee and just like the honey bee, the queen is the mother to all the bees in the colony. Bumblebees eat the sugary nectar and pollen made by the flowers. 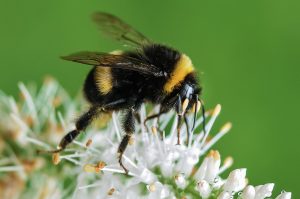 The yellow jacket is a bright yellow (shocking) insect that builds a big nest to house their colony. These bee-sized wasps are black and yellow with yellow markings on the front of the head and yellow banding down the abdomen. The face is mainly yellow with dark black eyes. Other insects mimic the aggressive yellow jacket in order to avoid predators.

Much like the honey bee, yellow jackets have a queen bee, worker bees, and drones in each colony. The yellow jacket sting is extremely painful, but normally happens upon a disturbance of the colony. These jackets have smooth stingers, so they can sting you more than once. 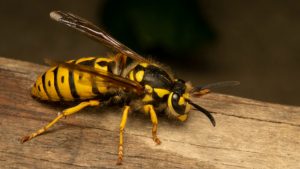 When it comes to appearance, the carpenter bee is most similar to the bumblebee, except for their smooth abdomen. Another way to tell them apart is that bumblebees normally nest underground, while carpenter bees burrow tunnels into wood to lay eggs. They are also unique in the way that they do not live in colonies.

Carpenter bees survive the winter by moving into the brood tunnels they created during the warm season. Those that survive, emerge and mate in the spring. The tunnels are easy to find as they are perfectly round circles about the size of your finger. Sometimes you will even find a small pile of sawdust outside the hole. 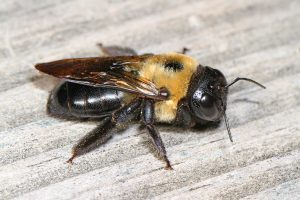 Paper wasps look most similar to yellow jackets, but are somewhat slimmer. Their color is mainly brown with some yellow colorations. Each species of paper wasp is similar but can be differentiated by their band colors and markings. Some species will even be red-colored or have brighter yellow bands.

Paper wasps will normally build their nests in a residential yard’s shrubs, hedges, or trees. They are also known to build their nests in crevices of homes, so be sure to close all gaps. Their stings can be very painful and normally turn red and swell up. These insects eat nectar and other insects including caterpillars and flies.

Remember that these stinging insects can cause dangerous allergic reactions to those who are susceptible. If you suspect you have an infestation of any of these bugs at your house, give Bugg Busters a call! 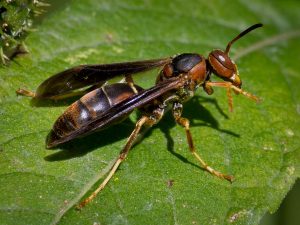 Enter your phone number below and we’ll give you a call.

Mosquitoes are the most dangerous animal on the planet. They cause over 700,000 deaths every year.